Author: Blueprint for All

Back to news listing

International Women’s Day (you can find the official website here) ‒ or IWD ‒ has been celebrating the successes and challenging the injustices of women around the world for decades.

While these injustices demand so much more time than just one day, International Women’s Day is still an effective amplifier of the voices of women, and a powerful step in the right direction.

But do you know the history of International Women’s Day?  We are going to celebrate women today, while also highlighting the struggle of women in colour face, particularly in the workplace.

Join us in solidarity as we find out all there is to know about International Women’s Day.

What is International Women’s Day?

International Women’s Day (IWD) is a day of celebration, action, and awareness for women and the challenges or injustices we face every day.

It’s a day to acknowledge achievements, tackle prejudice, and proudly look back at how far we’ve come.

International Women’s Day is just that ‒ international ‒ so it’s celebrated globally on the same day, bringing together women from every corner of life.

What is the purpose of International Women’s Day?

The purpose of International Women’s Day is to shine a light on the issues and inequalities affecting women across the world, celebrate the achievements of women, and open discussions about how we can bring about positive change with equity and equality.

It’s all about uniting together to be the difference.

International Women’s Day is not about putting men down,  it is about gender equality ‒ that’s equality for men, women, non-binary people, and everyone in-between.

In fact, some people prefer to call IWD ‘Civil Awareness Day, ‘Anti-Discrimination Day’, or ‘Anti-Sexism Day’, to open it up beyond people who use the term ‘women’ to identify themselves.

Why do we need International Women’s Day?

Well, here are just some of the reasons:

I am not free while any woman is unfree, even when her shackles are very different from my own.

Women of color continue to have a worse experience at work

Despite progress over the years, women of color continue to face significant bias and discrimination at work. They are experiencing similar types of microaggressions, at similar relative frequencies, as they were two years ago. And although the number of White employees who identify as allies to women of colour has increased over the past year, the number taking key allyship actions has not.

While all women are more likely than men to face microaggressions that undermine them professionally—such as being interrupted and having their judgement questioned—women of colour often experience these microaggressions at a higher rate. And women of colour are much more likely than White women to face disrespectful and “othering” microaggressions that reinforce harmful stereotypes or cast them as outsiders. These experiences can take a heavy toll: women who regularly experience microaggressions are twice as likely as those who don’t to be burned out, more than twice as likely to report feeling negatively about their job, and almost three times as likely to say that in the past few months they have struggled to concentrate at work as a result of stress.

Given the day-to-day challenges they’re facing, it’s not surprising that less than half of women of colour feel their company has substantially followed through on commitments to racial equity.

Women of color face a wider range of microaggressions

All women are more likely than men to face microaggressions at work. But for women of colour and women with other traditionally marginalised identities, these experiences are more frequent and reflect a wider range of biases (Exhibit 6 below). For example, Black women are almost four times as likely as White women—and Latinas and Asian women are two to three times as likely—to hear people express surprise at their language skills or other abilities, and we see a similar pattern for other common microaggressions, as well. 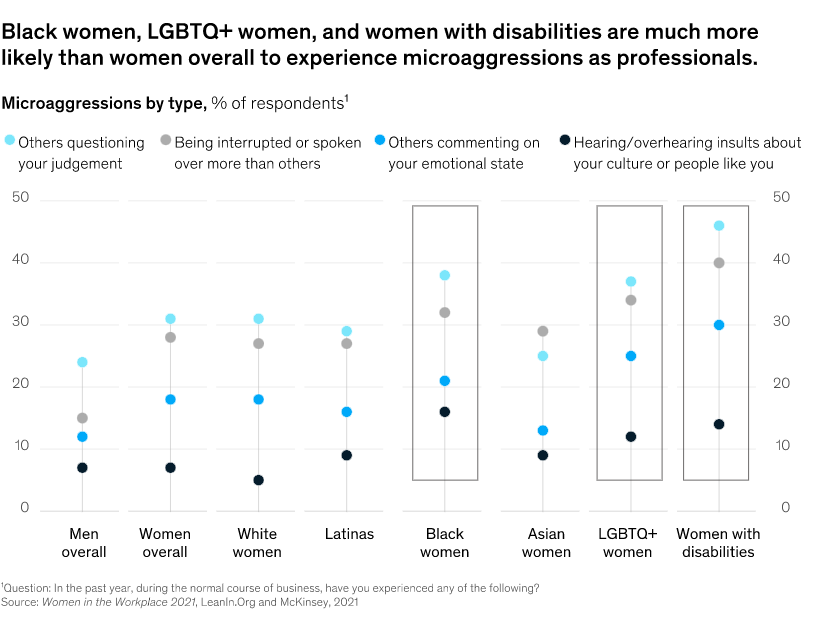 Allyship from more privileged colleagues can make a big difference in the experiences of women of colour: when women of colour feel like they have strong allies at work, they are happier in their jobs, less likely to be burned out, and less likely to consider leaving their companies. But although more than three-quarters of White employees consider themselves allies to women of colour at work, far fewer are taking key allyship actions consistently.

There is a notable disconnect between the allyship actions that women of colour say are most meaningful and the actions that White employees prioritise (Exhibit 7). Although White employees recognise that speaking out against discrimination is critical, they are less likely to recognise the importance of more proactive, sustained steps such as advocating for new opportunities for women of colour and stepping up as mentors and sponsors. 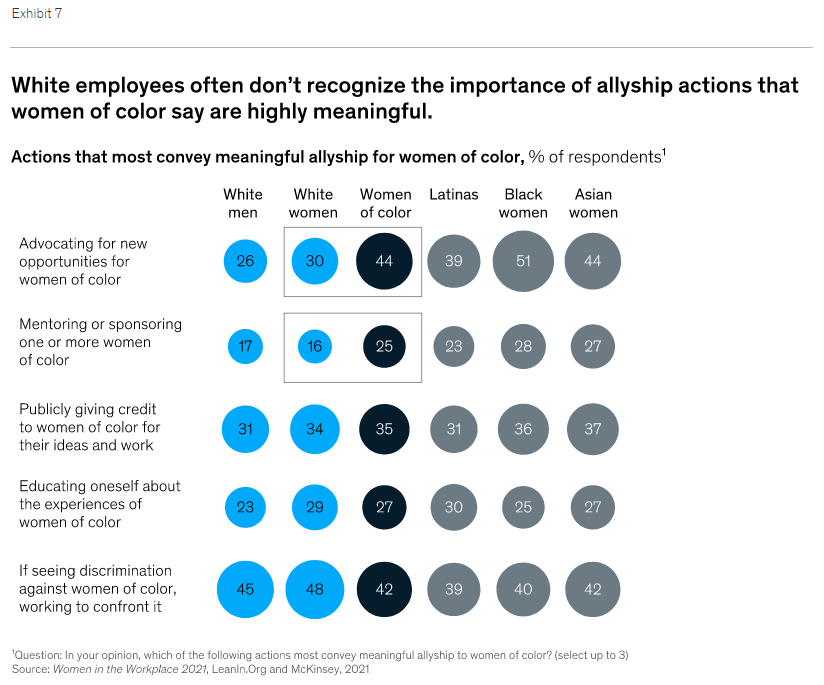 The road to progress

Although we have seen important gains since 2016, women are still significantly underrepresented at all levels of management. And on top of this, women continue to have a worse day-to-day experience at work. Women are more likely than men to have their competence questioned and their authority undermined, and women of colour and other women with traditionally marginalised identities are especially likely to face disrespectful and “othering” behaviour.

To drive change, companies need to invest deeply in all aspects of diversity, equity, and inclusion. This starts with taking bold steps to ensure that women of diverse identities are well represented, but diversity of numbers isn’t enough on its own. Companies also need to create a culture that fully leverages the benefits of diversity—one in which women, and all employees, feel comfortable bringing their unique ideas, perspectives, and experiences to the table. When women are respected and their contributions are valued, they are more likely to be happy in their jobs and to feel connected to their coworkers.

To accelerate progress for all women, on all fronts, companies need to double their efforts when it comes to accountability. Despite saying that gender and racial diversity are among their most important business priorities, only two-thirds of companies hold senior leaders accountable for progress on diversity goals, and less than a third hold managers—who play a critical role in hiring and promotions decisions—accountable. Moreover, among companies that say they hold leaders accountable, less than half factor progress on diversity metrics into performance reviews, and far fewer provide financial incentives for meeting goals. This means their accountability isn’t tied to material consequences—and it’s therefore much less likely to produce results.