Back to news listing

In the lead-up to International Day for Eliminating Racial Discrimination, we asked our team for written contributions about the occasion, about anti-racism and what it means to live in a world where social media has taken over plenty of awareness days.

We wanted to include them in the conversation, taking their thoughts #BeyondTheFeed. One of our Building Careers programmes officers, Ayo Okoya, had some thoughts.

It always feels interesting and almost exciting when you get an opportunity to discuss issues that you’re passionate for, especially those that have a lasting effect on your everyday life. To give a short introduction, my name is Ayo, and I am a programmes officer here at Blueprint for All. I am of Nigerian descent, and I was born and raised in North London – to put it bluntly, I’m a black man in the UK. When I was asked to have a part in the discussions surrounding the International Day for Eliminating Racial Discrimination, I jumped at the opportunity for two reasons:

I had no idea that an “anti-racism day” even existed and I can imagine this something plenty of people can relate to. I took the opportunity to be part of the discussion considering, despite the increased attention to institutional racism present in the world, racism and racist people are still very present in our everyday lives.

The increased attention, which in turn, has led to an upsurge of people and companies wanting to not be associated with racism – to be viewed as anti-racist. This begs the question, what does it mean to be profoundly anti-racist? 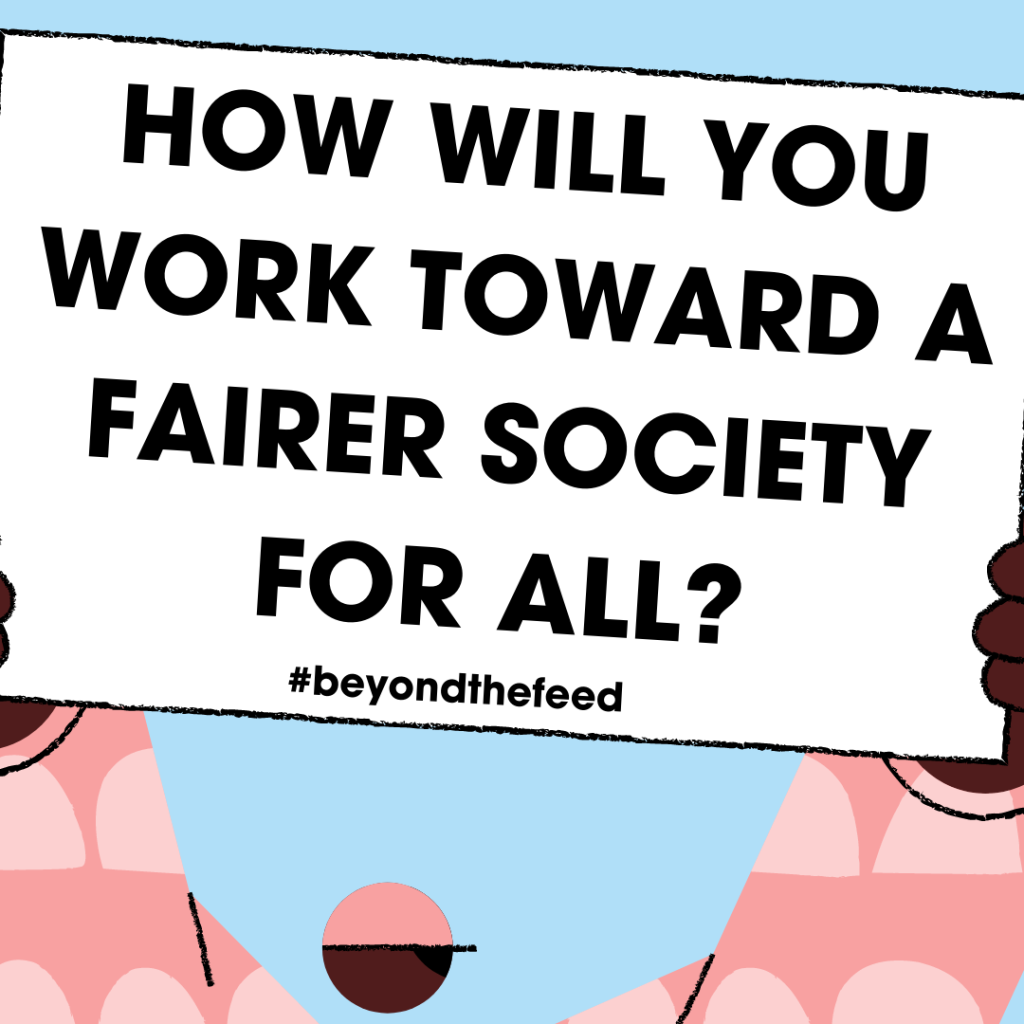 What does it mean to you to be profoundly anti-racist?

Contrary to popular belief, there is more to being anti-racist than simply denying racism; proclaiming “I am not racist” is not enough. To be anti-racist means to acknowledge internal biases and behaviour that are harmful to people of a diverse ethnic heritage. It means to not only condemn discrimination but to hold your peers accountable who exhibit such behaviour. It means offering compassion and empathy towards black and ethnically diverse people when they come forward to discuss issues that are affecting them, without dismissal or casting blame.

Above all, being anti-racist means believing in the lived experiences of people without questioning its validity – if a person felt comfortable enough to expose something that might be traumatic and leaves them vulnerable, it stands to reason that they are telling the truth.

How can people take their anti-racism #beyondthefeed? Where can they donate, what books can they read, what conversations can they start?

Posting hashtags and black squares on your Instagram feed can be an easy way to participate and show support, however it can very easily be seen as performative activism. It is easy to post about being anti-racist on your social media feeds, but it takes much more.

Systemic change cannot happen overnight but there are several ways you can make a difference. These can include, but are not limited to signing and sharing petitions from petition.parliament.uk that not only highlight injustice, but also promote inclusive changes in education, workplace, and society, supporting/donating to Black and Ethnic Racial Justice organisations, reading/consuming content from reputable creators of an ethnic diverse background that discuss these issues, such as:

The most important thing someone can do for this, beyond it all, is having these difficult conversations with their peers and loved ones about anti-racism and the impact racism has, not just on people of an ethnically diverse background but on society. As unpleasant as it sounds, the reality is there is privilege in whiteness (and being adjacent to whiteness) – a white person’s views and opinions are far more likely to be listened to. With that in mind, it is important to be able to use said privilege to inform people like you of these issues and then, directing people to these resources to learn more.

A valuable part of conversing about racism as a whole or how to be anti-racist is the ability to listen. Being able to listen to a person of diverse ethnic heritage with no interruptions or wanting to overrule their point later, but to listen their experiences with open ears and no judgement in your heart. On the other hand, not forcing someone to have these conversations is also important. At the end of the day, racism is a traumatic experience many people have had to live with, or witness and it can be difficult to relive and discuss.

I attest to how uncomfortable these conversations can be, especially when you feel like you’ve been placed in a corner to talk just to appease someone else. Acknowledge that there is a time and a place for these conversations and a person is not any less of an activist or a supporter for not wanting to discuss all the time.

To find more resources, Ayo has recommended this useful list:

Resources to aid Anti-Racism (in the UK especially) (google.com)

Considering Anti-Racism Day, we at Blueprint for All decided to ask ourselves what eliminating racial discrimination entails. Speaking to people within our organisation, we wanted to include them in the conversation, taking their thoughts #BeyondTheFeed. We spoke to Hermione, Libby and Simone from our programmes team to share what being anti-racist means to them.